It Looked Better Than It Worked 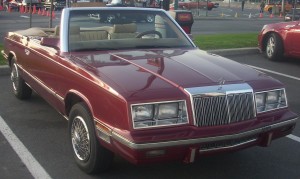 In the early 90’s my mother had a cool, red convertible car that she loved. We all enjoyed driving it or riding in it -wind blowing through our hair. That is, until it stopped working. What I mean is, there was something wrong with the motor that made the engine stall after driving it for a while! When that happened, the only solution was to let the car cool down, then try to start it and drive a little further until it died again. Obviously, dad had it in the shop pretty quick after it started acting this way, but the problem never really went away –occasionally, it would do the same thing again.

I remember taking it on a short road trip after we thought it was fixed. It was a one and a half hour road trip and I was anxious to get to my destination. I was feeling very cool and enjoying good music, when suddenly the engine stalled and I coasted to a halt on the shoulder of the busy highway. It is hard to describe the frustration and feeling of helplessness I had knowing that all I could do was wait until the car cooled and decided it was ready to take me down the road a little further, only to do the same thing again! The one and a half hour trip took four hours! Mom’s car looked better than it worked.

This story reminds me of a great organization that was crippled by negative conflict. For decades they had been doing incredible work with kids and families, but were experiencing a time when their staff had enough negative conflict between them that their mission and objectives were at risk of not being met. At the heart of it, people on the broader leadership team agreed on their mission and objectives, but did not agree on how to accomplish them. So, disgruntled team members would talk together about the issue, fueling their bitterness towards the organization. Board members and other top-level leaders tried to explain their decisions but were unable to sway the others to change their minds. The result was that a divide developed between the leaders and the rest of the team –they talked less, they avoided eye contact, etc. Then eventually the workers spent less time it the office (avoiding their supervisors), wrote less detailed reports and generally went out of their way to avoid contact with their superiors. At that point, much of the team’s energy was being spent managing bitterness, wrong assumptions and misunderstanding. This was a total disaster considering the limited resources this non-profit organization operated with –they simply could not afford to be running at less than full efficiency. It looked like a successful organization on the outside (to the public), but it actually had a critical problem with its “engine”.

I am happy to report that eventually things got back on track, but only after many months of frustration and the resignation of some of the staff. Whether people really needed to leave to or not is a point of debate, but maybe it did not have to go that far, because for a time, the organization was crippled. Taking advantage of the conflict by communicating differently and digging down to understand each person’s need could have actually made the conflict positive! Instead, the organization unfortunately looked better than it worked. I hope your organization will be proactive enough to take advantage of your conflict instead of wasting your most valuable resources –your people.